Andy is one of the main characters in the series, About a Boy. He is portrayed by Al Madrigal.

Andy is Will's best friend. He has three children and his wife is Laurie. He thinks that raising a child is the greates honor that person can have. He is more mature than Will, since he has children that he needs to take care of. He was once a DJ.

Andy is medium high man, with blue eyes. He has a beard and glasess. He usually wears shirts and jeans.

At the start of the episode Andy is riding with Will in a tram and he is feeding his three childreen. Then, he doesn't appear for the long time. 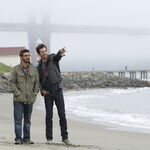 And he then appear at the beach talking to Will and having a picnic with his wife. Andy talks to Will at the beach and tells him that he gives up to fast. When Will remembers about Marcu's performance he takes Andy with him to the school. At the school Andy pays to a DJ 20 dollars so he can DJ it so he can help Marcus and Will make a great performance.

Andy is first shown talking to Will at his home and sitting at the tabel with hs son Jonah, Madison and Alex. He is giving Will edvice what to do and he says to him that he cant bail on babysitting Marcus. He tells him that Fiona is single other looking for job. Later When there are Will and Marcus at Will's house talking and sitting at the table. Andy then comes all brethie and stuff and tells Will that Lil Jon is hosting a pool party and that they are invited. Then when Will tries to bride him he tells him that there's no way that he is babbysitting Marcus insted of him. At the party is he only shown having a really good time and dringinf alchohol.

Andy was first shown at his house taking care of his three childreen. He was doing it with help of his wife Laurie. Then when Will came they talked about having a boys night out. And then they really go, but in the middle of driving Andy got a call that Madison needs to pup and that she can't do it withouth him. So he told Will that he needs to go back home, but because Will didn't want to stop the car Andy threw himself of the

car. Then when he was done halping his daughter he went to Will's house so they could have that Boys' night out, but then Fiona came and told him that he's not at home. Then later Andy was already at Fiona's house drinkign vino with her and repairing her locker. Then when Will came Andy told him that there's nothing between them.

Later when Will came Andy told him that he was not a good friend, cus he didn't stop the car and he needed to jump out. When Will told Laurie that he spend  evenening with Fiona he was looking for excuses. Then when Will and Andy were walking outside Andy was taking care of his childreen and when he droped Jonah's tutu he picked up and licked and then give it back to Jonah. But then he got into a fight with Will and left. Then when Will came and offered help for babysitting he thought it was a great idea and he forgive him for being not a good friend. On the end he was shooting Will saying his speech as Jonah's godfather.

He was only shown listening to Will how he was complainging about how he can't get a girl. He was holding Jonah.

Andy was with Will in Will's backyard. He came from his house and he told him that if he can grill him a meat, but it can't be red meat, because Lauri(his wife) wants him to lost some weights. When later Will rejects Marcus for a grilling lesson Andy was trying to tell Will that he should be more nice to him. When Marcus said that he will play all by himself Andy felt really bad form him.

Andy was first shown in his living room with Will. He was doing laundry. Will was telling him how awesome is Samantha Lake. Andy was just listening. Later at Will's house he was drinking beer and he was again listening to Will how great is Sam. Then Will showed him his perfect girl notebood and Andy couldn't believe that he still has it. Then he open it and started to read his perfect girl facts. Then when Marcus came and said something that he couldn't understand he said do you even know what does that mean?.

About a Poker Night[]

About a Boy's Dad

About a Birthday Party[]

About a Rib Chute[]

Will is Andy's best friend. They are friends from school already.

Laurie is Andy's Wife. They have three kids.

Community content is available under CC-BY-SA unless otherwise noted.
Advertisement